Ola is ready to bring revolution in the India. Ola launched its first electric vehicle in the country. After long wait! Ola Company comes with its Ola electric scooter in India.

Ola Electric Scooter Plant has set up in the Krishnagiri district of Tamil Nadu which is world’s largest acting two wheeler factories, where Ola will manufacture 200,000 electric scooters annually to supply to Asia, Europe and South African markets apart from demand.

Team ElectricYug is concerns about the environmental changes and puts little efforts to promote the electric vehicles and renewable energy sources. In Today’s blog of electric scooter we will mainly focused on Ola Electric Scooter in India.

Along with this, the facility of smartphone connectivity will also be available in this electric scooter.  This will help in giving real time information of charging status through Ola Electric app.  At the same time, customers will also be able to make payment of service through this app.

Also, it will get bigger boot space.  You are shown holding a helmet in the boot space in the teaser.  Usually only one helmet can come in the middle of the scooter. So you can put two small size helmets in the boot.

The company claims that the scooter will be charged up to 50% in 18 minutes with the pass charger. It will get a range of 75 km.

Customers will also be able to charge this scooter from the regular valve socket.  Also the company plans for bigger electric charging network, so that electric vehicle customers do not face any problem in charging across the country.

The company has started setting up the HyperCharger network in India, in which one lakh charging points will be installed in 400 cities. In the first year company will turn off 5000 charging points across 100 cities.

Bhavish Aggarwal, founder of OLA Cabs and CEO of OLA Electric, announced on Tuesday that the company is planning a launch event for the much-anticipated Ola electric scooter on the eve of India’s independence day, August 15th.

The launch of the electric scooter is part of the global vision that aims to make motilities qualitative, better and more connected to the future. 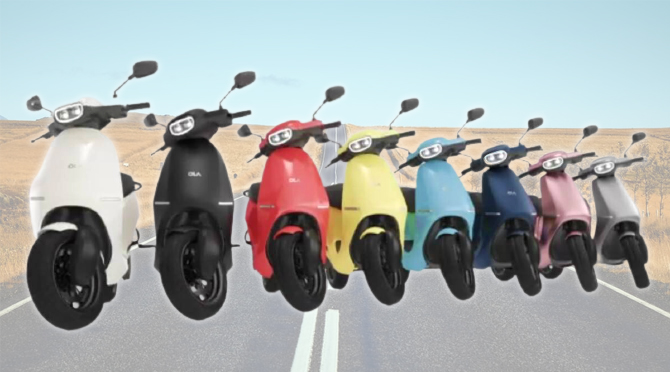 Ola Electric Scooter, which has received much discussion and enthusiastic response from netizens, has now announced the launch of 10 highly anticipated electric scooters in different colors. Ola CEO Bhavish Agarwal revealed the color selection of this electric scooter on Twitter. According to the tweet, you can see that the electric scooters are available in white, black, red, yellow, sky blue, navy blue, pink and gray variants

In order to build the world’s largest two wheeler manufacturing facility, Ola is planning to sell 10 Lakh scooters in the first year itself with an investment of ₹ 2,400 crores.

Ola may launch its electric scooters in July and may face competitors such as Ather 450X, TVS iQube and Bajaj Chetak.

Although there is already a cheaper and better e-scooter available in the market to give tough competition to Ola. There is no official statements from Ola for Ola electric scooter franchise you will get more information on Ola Electric Official Website.

Now it remains to be seen how Ola Electric manages to establish its dominance in the emerging electric two wheeler segment of India.

Thanks and regards to Ola Electric Scooter, stay tuned!